Tajikistan has several unique dishes that anyone has to try when visiting. The Tajik cuisine particularly uses lots of rice, bread, meat and dairy products. With food being very affordable, there are no excuses to taste everything Tajikistan has to offer. Read on to find out about the food not be missed in Tajikistan. 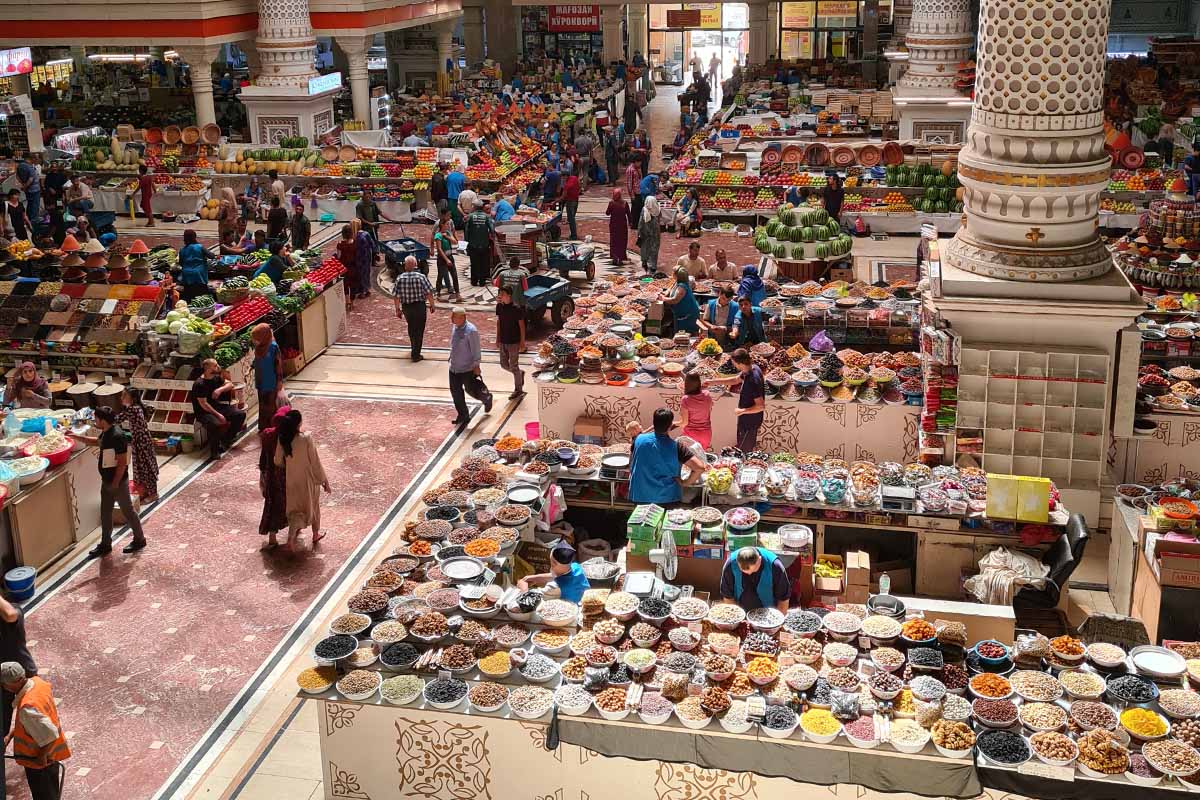 Tajikistan has its characteristic dishes that anyone has to try when visiting. The cuisine has a lot in common with the neighbouring countries in Central Asia. The food in Tajik restaurants is very affordable for western standards with main dishes going for a few dollars. The Tajik typically eat their food from a large communal plate called tabak (табак). Below are some of the most common dishes that can be found in almost any road side restaurant or canteen-like establishment (столовая) throughout Tajikistan.

What else to start with than with plov. The national food and the Tajik dish par excellence. Plov is a rice preparation with carrot, onion and a characteristic seasoning. The dish usually is rather oily and topped with chunks of beef. The word osh [ошь] is also commonly used for plov. Osh simply means 'food' in Tajik. This just goes to show how important this dish is in Tajik cuisine.

Qurutob is a creamy mix of vegetables and flatbread. It is a great option if you want to take a step away from the meat that abounds in the Tajik cuisine. The special ingredient of qurutob are qurut, which are salty cheese balls. The qurut are put in water (об/ob) to make a sauce that is poured over the pieces of bread and then topped with vegetables. Find a qurutobkhona (курутобхона) – qurutob house – and try it out!

Shurbo literally just means 'soup' in Tajik. And that is exactly what it is. There are many variations to shurbo, yet the traditional one contains potatoes, carrot and chunks of meat and fat. Shurbo is one of the most common meals you will find throughout Tajikistan.

Laghman is a soup with a somewhat richer filling than shurbo. The characteristic ingredient of laghman are thick noodles, which are served in a broth with vegetables and meat.

Shirchoi literally means milk-tea. And that is exactly what it is – a mixture of milk and tea. The shirchoi is eaten with pieces bread that are soaked inside the milk-tea. A chunk of butter can be added for some extra creaminess. Despite the simplicity, the dish is hugely popular throughout the Pamir. Shirchoi is a typical breakfast meal, but Pamir people can eat it basically any moment of the day. Even after normal dinner, a portion of shirchoi can be taken as a ‘dessert’. For many Pamiri, shirchoi truly is an indispensable and essential part of the daily life.

The ultimate street food of Tajikistan. Sambusa are pastries usually filled with diced meat and onions. Sambusa are sold by street-side vendors throughout Tajikistan. When you are on the road and feel that pinch of hunger, snuck in one or two sambusa, and you are ready to go on. Sambusa at street-side stands mostly go for 5 SOM (0.30 euro).

Manti are steamed or boiled dumplings that usually have a meat filling. They are a more healthy alternative to the deep fried pastries. Manti are not too large in size, making them into a nice side dish or snack on the way.

Fish is not common on the menu in Tajikistan being far from the seas and other large water bodies. Fish, mostly trout, are caught in several rivers and lakes. Fish is mostly eaten deep fried. Near the Nurek reservoir, fish is a common dish and prepared along the road. Even in the Pamir you can find fresh fish at several places.

Non is the Tajik-style bread. Obviously it is not an actual dish yet impossible to not mention in an article about Tajik eating culture. The Tajik non is typically a large and round flatbread. Bread accompanies basically any meal in Tajikistan.

No Tajik meal goes without tea (чой). Black and green tea are the most common types. Tea is an essential part of the daily Tajik life. The Tajik traditionally welcome guests with a cup of tea as a gesture of hospitality. The importance of tea to Tajikistan is reflected by the large number of tea houses (choikhona/чойхона), including one of the world's biggest in Dushanbe.

Another typical drink in Tajikistan is compot (компот) – a type of fruit juice. Sweet drinks are popular especially in the scorching-hot Tajik summer. In the hottest time of year, cold lemonade drinks are sold everywhere on the street to be drunk on the spot and quench your thirst. A glass usually goes for 1.5 SOM (0.10 EUR).

See all treks
This website uses cookies to improve the user experience. By clicking 'Accept', you consent to the use of cookies.Accept