The Hisor Fortress is one of the best preserved historical sites in Tajikistan. Strategically located on a hilltop, the fortress was built around 2500 years ago. Throughout the turbulent history of the region since then, this ancient stronghold has witnessed many changes in power, being demolished and rebuilt numerous times. Less than a one hour drive from Dushanbe, the Hisor historical site is ideally suited for a day-trip from the capital for those interested in the Tajik history. 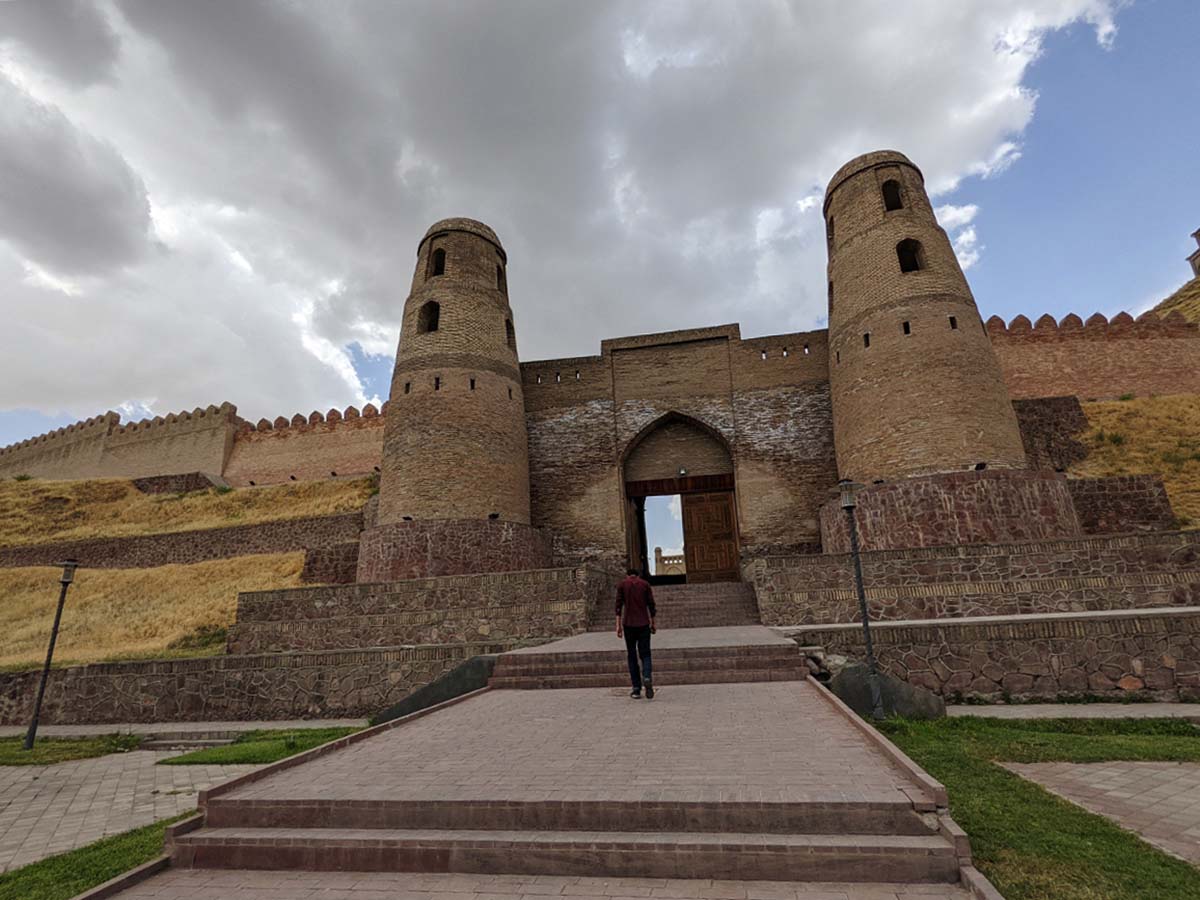 The Hisor Fortress is one of the best preserved archaeological sites in Tajikistan. The first activity around the fortress goes back at least to the Achaemenid Empire around 500 BC, and possibly even longer ago. At that time, Hisor was the most important settlement in the region. This remained so for a long time, while Dushanbe was just a simple market place until it became the capital city 100 years ago.

Since its establishment, the Hisor Fortress has seen an almost endless coming and going of emperors, emirs and other rulers. Its strategic position close to the Silk Road continuously awoke the interest from nearby – and not so nearby – conquerors, from the Mongols to the Arabs. Legend has it that even Alexander the Great captured the fortress at some point in time, while the emir of Bukhara used the place as a winter residence. And at one point, Hisor was actually an independent khanate. Later on, the Soviets appeared on the scene trying to expand their sphere of influence. In short, quite a lot of turbulence...

Throughout this turbulent history, the Hisor Fortress suffered. Facing serious destruction not even too long ago by the Red Army, the result is that the original fortress did not really manage to stand the test of time. Through history, it was demolished and reconstructed time after time. For this reason, pinpointing the exact age of the fortress is pretty difficult for archaeologists.

At present, the fortress features a gate and fortified walls with several buildings inside the complex. The fortress is located on a hill close to the Khanaka River. From the hilltop, a wide view opens up over the large plain and numerous surrounding villages. The strategical position made the fort in the past into an ideal place to ward off incoming enemies and protect caravans passing the Silk Road.

The main gateway is the most eye-catching part of the fortress and dates back to the 16th century, although the gate existed possibly already in the 5th century. Whereas this arched gateway is still largely original, multiple renovations have been carried out over the last decades to restore the rest of the fortress. Mainly the outside walls have been reconstructed in an attempt to show how the fortress looked several hundred years ago.

Owing to the thorough renovations from the 1980s onward, the fortress is presently in a good condition and a photogenic place to visit. You are free to explore the fort by climbing up the gatehouse and wall surrounding the complex and enjoy the far-reaching views.

The inside the fortress features a chaikhona and a footway flanked by numerous buildings a.k.a. souvenir shops that by the way do not have much to do with the original historical layout. The inside can basically be seen as an effort to develop the site into a proper tourist attraction. There is even a field in the inside where you can do horse riding. Overall, the inside area is nice for a stroll, but do not expect to find too many relicts of true archaeological relevance.

The fortress is part of a larger archaeological complex. In its direct surroundings, there are several ancient buildings, including two madrasas (religious schools) and an 8th century mosque.

The Old Madrasa presently serves as a museum. It features a central courtyard bordered by former student rooms that nowadays have exhibitions on display about the Tajik culture and history. Altogether not extremely special, but surely worthwhile to take a quick look when you are there. The new madrasa that is just next to the old madrasa is not open for visitors.

On the other side of the Old Madrasa, there are the remains of an 18th century caravanserai – a resting place for travellers/traders – that hints to Hisor's past as a trading hub. Unfortunately, the caravanserai was partly deconstructed when the Soviets decided to re-use parts of it to build a theatre in Dushanbe.

The historical site of Hisor is particularly loved by many Tajiks. In the weekends, the fortress is a highly popular place for photo shoots of bridal couples. So even though you doubt on the historical value of the site due to the continuous renovations, this can already be a reason to go and take a look. An image of the Hisor Fortress is even on the bank note of 20 somoni, which goes to show how significant this landmark is in present-day Tajikistan. Altogether, the site is a photogenic place that is certainly worth the visit if you have some time to spare. And if you decide to go, you can also check out the nearby city of Hisor, which can be quite buzzing and has an authentic bazar.

How to get there?

The Hisor Fortress is situated about 25 km from Dushanbe. The easy way of getting there is by taxi, which is quite affordable – depending on your bargaining skills – since it is only a short drive. If you do want to save out a few somoni, you can also reach the fortress using shared taxis. To do so, you first need to go to the taxi stand at the western end of Ismoil Somoni Avenue. Shared taxis regularly run to the center of the city of Hisor. From downtown Hisor, it is then another 5 km to reach the fortress, which lies just outside the city. Shared taxis frequently go to the fortress departing from the main bus station in Hisor. The entrance fee to the fortress should be around 10 SOM (tourist rate) and can be paid at the main gateway.