Tajikistan lies right in the collision zone of two continents. Over millions of years, extreme tectonic forces have shaped the country into a rugged landscape of mountain ridges, valleys and peaks. And the mountain building is still ongoing! Over 90% of Tajikistan is mountainous with most of the country higher than 3.000 meters. The geology is complex, but knowing the basics will give an extra dimension to your trip when traveling through the mountains of Tajikistan.

The Tajik mountains are among the highest places in the world. The greatest altitudes are in the Pamir Mountains with the absolute summit lying at an impressive 7496 meters (Ismoil Somoni Peak). The creation of the mountains started about 65 million years ago as the Indian tectonic plate collided with the Eurasian tectonic plate. The ancient Tethys Sea in between the continents disappeared as the Earth's crust in the collision zone was pushed upwards to form the highest mountain range in the world.

Because the Indian plate moves in a northward direction, you will find that most mountain ridges in Tajikistan have an east-west orientation – they develop perpendicular to the direction of the highest tectonic stress. The Tajik mountains lie in the same belt as the Himalayas, the Tien Shan and the Karakoram. All these high-altitude mountain ranges developed at the same time as part of the Alpine orogeny. As the name already gives away, the Tajik mountains also have the same age as the European Alps.

For a full geological picture of the region, you need to go back much further than 65 millions years. Over hundreds of millions of years, the area has been through many phases of mountain building (orogeny) and sedimentation. During each phase, old structures (like fractures or folds) are re-activated and new ones are created. This all leads to an extremely complex geology in the present-day. You can find geological structures and rocks that date back all the way to the Precambrian (over 540 million years ago).

Drawing borders in the dense mountain system across Tajikistan is difficult. Yet, two major mountain ranges are generally discerned. There is the main Pamir Range that covers the east of the country and the Pamir-Alay that form and east-west belt more towards the west of the country. The Pamir-Alay includes the Fann Mountains and the Zerafshan Range.

The current geological map of Tajikistan is a shattered assembly of many different rock types separated by innumerable fractures and faults. Some general trends do exist. In the Pamirs, for example, you travel back in geological time when going from north to south. In the northern part, there are predominantly sedimentary rocks like sandstones, shales and limestones from mostly the Mesozoic Era with ages varying between 300 and 100 million years ago.

In the south, you find rocks like gneiss, quartzite and marble that are much older, dating back to the Precambrian (older than 540 million years). These rocks are sedimentary in origin (e.g. sandstone or limestones) or magmatic (e.g. granite), but have changed their aspect and composition through time due to high pressures and temperatures deep in the Earth's crust – a process referred to as metamorphism.

Magmatic rocks are dispersed throughout all of the mountains in Tajikistan. The magmas rose up from great depths in the Earth's mantle at different moments in time. The most recent major magmatic event was during the onset of the mountain building 65 to 55 million years ago.

The Tajik mountains are still geologically active. The Indian plate continues its march northward against Eurasia, continuously pushing the mountains upward. Mountain ranges that are tectonically quiescent tend to flatten out over time and lose their 'sharp edges' through erosion – think about old orogens like the Ardennes or Appalachians. This is not the case for the mountains of Tajikistan, where the landscape still buckling and breaking under continued tectonic stresses. A clear proof for this are the several thousands of earthquakes that are recorded per year by seismic surveys (most of them pass by unnoticed).

The strong geological activity in Tajikistan leads to a highly dynamic landscape. The earthquakes are a main trigger for land slides and avalanches. Such debris flows may dam rivers and thereby form lakes that a few decades ago did not even exist. Lake Sarez is the most impressive example, formed by a massive land slide in the year 1911 that created a 567 meter high dam. This Udoi dam is in fact the highest in world – taking into account both man-made and natural dams.

Land slides are especially prevalent in the Pamir-Alay and the west of the Pamir Mountains, which are characterized by an extreme relief with high mountain crests that are deeply incised by narrow valleys. The eastern Pamir, on the other hand, is an ultra-high plateau with a base height of 4.000 meters, but with relatively low relief (mountains having a relative height less than 2000 meter above the base level) and much wider valleys and gentle slopes.

Ice plays an important role in sculpting the Tajik mountains. The word 'pamir' is thought to be a local term for the type of wide valley that is left after a glacier melts away – this landscape form is very common in the eastern Pamirs.

The Tajik mountains are rich in natural resources. From ore deposits to coal seams and gems. The formation of ore deposits has a tight link with the tectonic activity. As the Earth's crust is fractured under the high stresses, a network of fractures is created in the subsurface. Water can start circulating through these fractures and reach deep down into the crust. Deep in the subsurface, the water may dissolve minerals and metals from the surrounding rocks. When these mineral-rich fluids continue to circulate, the dissolved elements can precipitate and get concentrated at a specific place – that's how an ore deposit is born. Coal deposits, on the other hand, develop when organic-rich sediments are buried deeply. At depth, the organic material gets exposed to high heat and pressure and turns into coal.

The natural richness in ore deposits is hard to exploit though. Constructing a mine in the high mountains and transporting the ores back to civilization is a not so cost-efficient operation. Nevertheless, you can find lots of quarries and mining activity in the Tajik mountains. The list of ores exploited in Tajikistan is endless, but some of the most common are precious metals like gold and silver, base-metals like tin, tungsten and antimony, and non-metallic minerals like fluorite and phosphor. The exploration of natural resources altogether provides a good source of income to Tajikistan.

The large-scale exploration of gemstones is less common. Gemstones most commonly form under high pressure and temperature deep inside the Earth's crust and typically require specific elements to be present in specific quantities. This makes it difficult to predict where to find high accumulations of gemstones. Especially rubies are regularly found in a specific layer of marble the Pamir Mountains. Marco Polo already wrote in his reports about the richness of the area in rubies. In fact, the entire mountain system at the collision zone of Indian and Eurasia is renowned for its rubies. The formation of rubies is probably directly related to India smashing into Eurasia. Whoever finds a ruby should always report this to the authorities, yet many people will try to sell them illegally on the black market.

The Pamir region is also famous for its lapis lazuli. This is not an actual gemstone, but rather a rock type with a deep blue color. As for lapiz lazuli, there is not much widespread economic mining going on either.

As mentioned, 92% of Tajikistan is mountainous. So then you may ask, what about the other 8%? Welcome to the Tajik Depression in the southwest of the country. Dushanbe lies on the northern edge of the Tajik Depression. The existence of this low area has a direct link to the high mountains directly to the north and east of it. The Tajik Depression is a so-called foreland basin. A foreland basin forms when a mountain range pushes downward on the Earth's crust with its huge weight. As a result, the zones adjacent to the mountain belt develop into basins that continuously move downward.

These so-created basins can accumulate lots of sediments. In the Tajik Depression, the entire succession of sedimentary rocks reaches a thickness of up to 6 km. The oldest sediments are up to 200 million years old and were deposited in shallow seas before the mountain building began. The younger sediments, from about 30 million years ago to present, are erosional products from the uplifting mountain ranges at the sides.

The marine sedimentary sequences in the basin hold abundant salt deposits. In general, salt layers are highly impermeable and therefore the perfect rock type to form subsurface traps for oil and gas. There are several oil and gas fields in the Tajik Depression suited for economic exploitation.

Get to know more

This article is just a brief introduction into the geology of Tajikistan. You can find several links throughout this page with more detailed information. However, the best way to find out more about the geology of Tajikistan is to visit the country yourself! Without geological knowledge, though, all rocks may seem similar, and in your struggle to cross the high mountains on the way, it is easy to not pay attention to the variations in the rocks surrounding you. No worries though – we can get you a local guide with a degree in geology to tell you everything along the way. Just send us a message if you are interested. 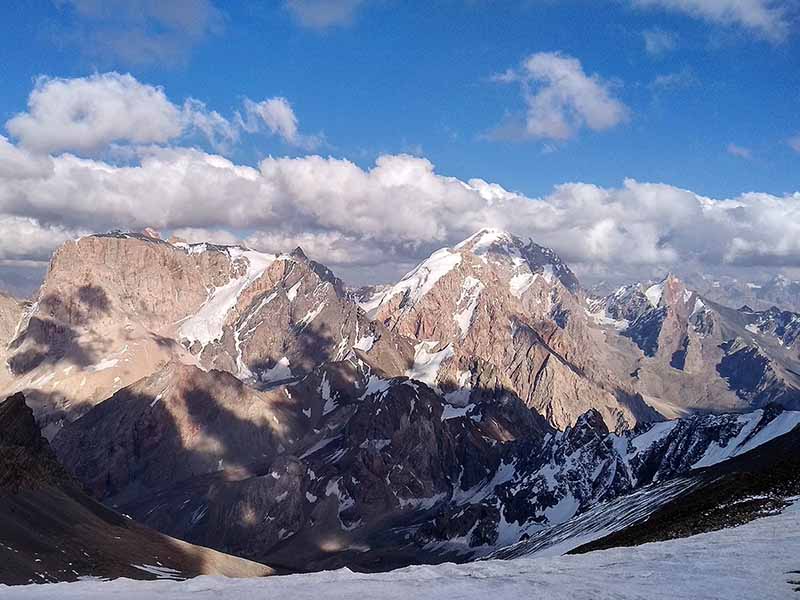