Home » Blog » Getting from A to B in Tajikistan
General information

Getting from A to B in Tajikistan

When traveling in a foreign country, it is convenient to be able to move around without too much hassle. As for Tajikistan, this does not really apply. The country lacks a regional public transport system. There are no easy bus or train connections for an easy transfer to the beautiful nature outside the city limits. If you want to travel large distances, you rather need to find a shared car or use your own transport. With sometimes sketchy road conditions, traveling around in Tajikistan is a true adventure – of that, you can rest assured. 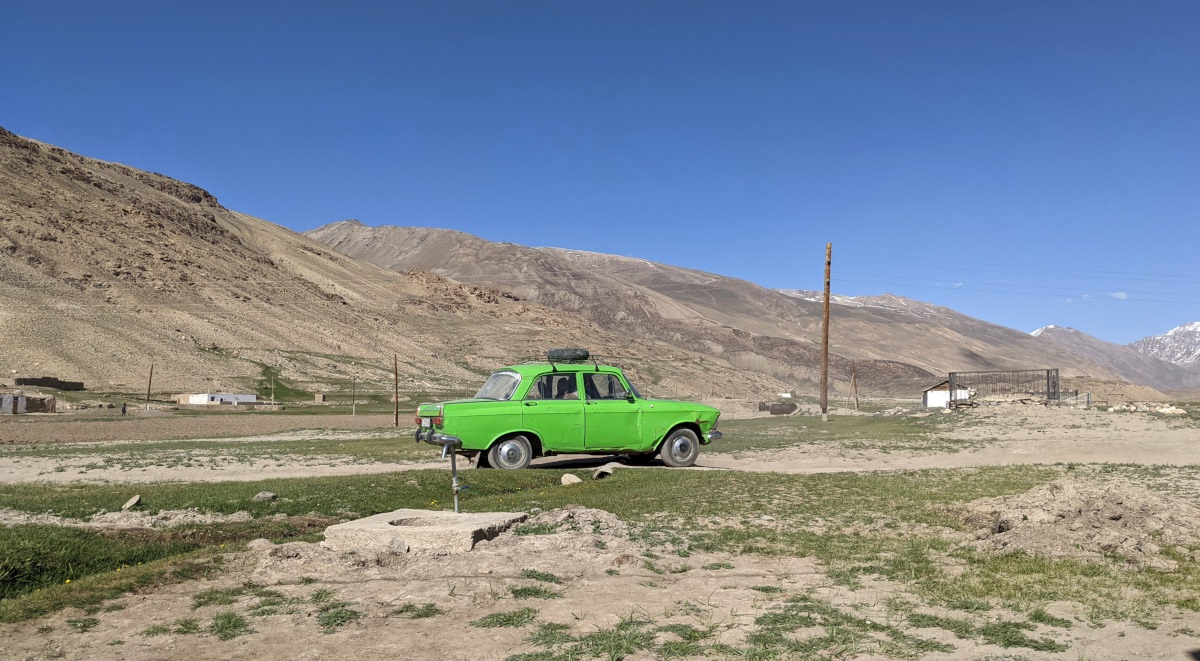 Let's start with some introduction about the Tajik road network for some perspective of the infrastructure you need to deal with. The bottom-line is that the road conditions are sub-optimal. This is quite logical as it is highly challenging to lay down a good road infrastructure in a country that is almost entirely mountainous.

Within the city limits, everything is generally alright and roads are well-maintained. Also the main roads connecting Dushanbe to large cities like Khujand, Tursunzoda, Qurghonteppa or Kulob are properly paved. It is mainly the smaller roads further away from the densely populated areas that are not that well maintained. And there, things get trickier.

Even roads showing as a nice think yellow line in Google Maps may turn out to be barely passable for normal cars. And the further you move into the mountains, roads deteriorate to the point that a four-wheel drive car becomes absolutely indispensable. The Pamir Highway is a nice example – it is the main road in the GBAO province, yet mostly unpaved apart from some stretches of not-so-well-maintained asphalt here and there.

The gravelly Pamir Highway is bumpy and winding endlessly along the Panj River in the east and among high mountains crests in the west. This is the main reason why it takes an incredibly long time to reach basically any place in the Pamirs. Even though the distance between Dushanbe and Khorog (the capital of the Pamir region) on the map seems not too long, the drive still takes at least 16 hours with a proper four-wheel drive vehicle. Nevertheless, despite the 'adventurous' state of the Pamir Highway, you will still see huge trucks transporting wares from and to China as it is the only road connecting Tajikistan with the east.

Many roads in the Tajik mountains run through narrow valleys and are therefore vulnerable to landslides and rockfall. Such road blockings can lead to serious delays as there are often no alternative ways around. The risk is especially high in spring due to thawing snow and more frequent rainfall. The rainy periods in spring can also convert unpaved roads into a slippery mud track.

The roads to the Fann Mountains or Zerafshan Range – other popular tourist destinations – are considerably better. These regions are also easier to reach due to their proximity to Dushanbe. When departing from Dushanbe by car, the travel time is around 3 hours for the nearest hotspots and 6 hours for the furthest places.

Now that you have an idea of the road conditions, it is time to talk about the options to move around in Tajikistan. Moving around within the limits of the bigger cities in Tajikistan is relatively straightforward, because usually there is a public transport system. In Dushanbe, busses and white vans (marshrutkas) with line numbers are running to most places. Although it can be hard to figure out the different lines, it is certainly the cheapest – and also slowest – means to make your way around town.

Using taxis is an even easier way to move around within the city limits – and relatively cheap! Most taxi drivers use their mobile phone as the meter with a starting price of 10 Somoni. A five to ten minutes taxi drive usually costs only around 2 USD. So for short drives, taxis are not even that much more expensive than taking a bus.

Within the city limits, everything is fine. However, Tajikistan lacks an organized public transport system at a regional scale. You cannot hop on a bus to head into the mountains – long-distance bus lines simply do not exist. An extensive train network does not exist either. Whenever you want to cover larger distances, you have to turn to other means of transport. This can make travel in Tajikistan as an independent traveler quite a challenge, especially when you do not speak Tajik or Russian.

Because regional public transport is practically non-existent, the most common way to travel faraway is by using shared cars. You barely see cars on the regional roads that are not full with passengers. Most people always try to fill up their car to be as cost-efficient as possible. The recent rises in fuel prices due to the global oil shortages and also local struggles with Kyrgyzstan – an important supplier of petroleum to Tajikistan – have made it currently even less economic to drive longer distances with empty seats.

Whenever hopping into a shared car, you most likely end up in an old car. Modern high-end cars are around, yet the majority of cars on the road are second-hand cars imported from Europe. This becomes quite obvious from German country stickers (D) or Dutch-language dashboard panels.

Revived Opel cars from Germany are probably the most common car you will see on the road. Normal passenger cars are obviously not suited though for rougher terrains and dirt roads. Whenever something stronger is needed, you most likely end up in a Land Cruiser – the first pick for the bumpy roads in the Tajik mountains.

Because road conditions are tough and cars not always brand new, you should be prepared to deal with unexpected delays because of mechanical problems with the car you are traveling in. The Tajiks luckily have a particular technical talent for keeping their old cars alive. Even overheated cars with flames shooting out of the hood are brought back to life within no-time. As long as a car is not falling apart completely, it is used, even if it requires a quick fix or cooling-down break every hour or so.

Altogether, you never know how long a drive will take beforehand when stepping into a shared car. Usually things go smoothly, but even a seemingly straight-forward drive can turn into a real adventure.

Most destinations have their own specific place where the shared cars depart. The gathering places are usually not indicated – all local people just know where to go. For tourists though, it can be pretty difficult to find out where the cars depart for your destination. This usually requires a bit of asking around.

Getting to small villages deep into the mountains is even more difficult, because mostly no shared cars go to such low-frequented destinations (think about Alauddin Lake or most places in the Pamirs that are not along the Pamir Highway, Panj River or Shakhdara River). For such trips, you would need to find a personal driver to make the connection with a main road or village. Most of the time, though, there is always someone around who is glad to make some extra money and help you out.

There are almost no car rental companies in Tajikistan, and those that exist are expensive even for western standards. As an alternative to a shared car, it is easiest to rent a car with driver to have your own means of transport. You usually pay a fixed price plus a price per kilometer.

Of course, you can also make the road trip of your life and drive with your own car to Tajikistan and forget about any of the above worries. It sounds crazy, but do not be surprised to encounter travelers who are actually doing this.

If you do drive yourself in Tajikistan, be prepared to deal with the road police. It is very typical in Tajikistan to see policemen standing at random places on the side of the road stopping cars for no obvious reasons to check documents (and get a small bribe). When they see you are a tourist and there is no means of communication, you can sometimes come off without too much hassle, but the whims of the Tajik roadside policemen can be unpredictable.

You read it correctly – the bicycle is another means of own transport that you could opt for. Of course, it is only an option if you are in a good shape and willing to suffer. Suffer a lot. The roads through the mountainous Tajik landscape are relentless going up and down non-stop. Nevertheless, there is a decent amount of hard-headed people every year crossing the entire Pamir Mountains by bicycle.

The Pamir Highway is seen by many as the holy grail for bicycle tourists. The trip is physically highly demanding and may require up to several weeks to accomplish, but the views you get in return are one-of-a-kind. And if you bring along some camping equipment, you have the complete freedom to determine your own pace as you move your way through incredible mountain sceneries.

Finally, the quickest option of all – the airplane. From Dushanbe, you can fly to Khorog in the Pamirs and vice versa to save you the 16 hour drive. Small airplanes operate irregularly between Dushanbe and Khorog. If you do manage to get on a plane, expect to pay something around 80 USD.

PREVIOUS Geology of Tajikistan
NEXT Ultimate guide to trekking in Tajikistan